Professor of Physics and Astronomy

Robert Caldwell is a theoretical physicist specializing in cosmology. His research addresses questions about the basic properties of the Universe. What is its history and future? What is its composition? What are the fundamental laws that govern its behavior? He has written scientific articles on topics such as dark energy, dark matter, the cosmic microwave background, gravitational waves, and the fate of the Universe.

He received a PhD in physics from the University of Wisconsin at Milwaukee in 1992, and has held research appointments at Fermilab, Cambridge University, the University of Pennsylvania, and Princeton University. He has been on the faculty of Dartmouth College since 2000.

He teaches both undergraduate and graduate courses at Dartmouth. Off term, he does research and travels. In the photo, he’s taking a break from 2013 summer lectures to hike in the French Alps.

Want to trace his physics genealogy? Click here to follow the path through Allen, Hawking, Sciama, and Dirac. His Erdos number is 4, and his Bacon number is 3, for a total Bacon-Erdos number of 7. 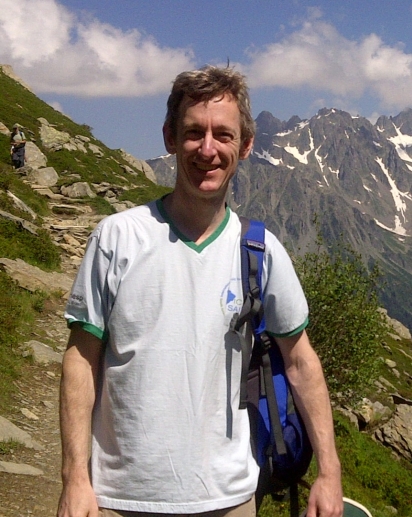