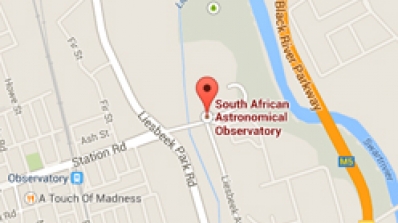 The Physics and Astronomy Department launched a new FSP during the Winter 2015 term, and the program runs every other winter term.  The FSP is based in Cape Town and Sutherland, South Africa at the South African Astronomical Observatory (SAAO), one of the darkest observatories on Earth. Sutherland is the home of Southern African Large Telescope (SALT). Dartmouth has a 9% share of SALT. This 10-meter telescope is the largest optical telescope in the Southern Hemisphere.

The view of the night sky from Sutherland is spectacular. The Large and Small Magellanic Clouds (nearby galaxies) are larger than the full moon and easily visible to the naked eye. The center of our Milky Way galaxy can be seen high in the sky. In Hanover, the center of the Milky Way appears low on the horizon and is barely visible. No nearby galaxies are easily visible to the naked eye in the northern hemisphere. On a dark, clear night in Hanover, one can see approximately 1000 stars, while in Sutherland, South Africa one can see over 4000 stars. The astronomy FSP gives Dartmouth students an opportunity to see and observe the night sky as you have never seen it before.

Cape Town is a dynamic city with a cosmopolitan mix of cultures and a metropolitan population of 3.7 million. It is the second largest city in South Africa, the seat of the National Parliament and a popular tourist destination for European travelers. It is a city of contrasts, from modern shopping centers and high end stores to townships where residents do not have running water in their one room accommodations. From majestic Table Mountain to numerous white sandy beaches, Cape Town is known for its stunning scenery.

During the FSP, students take Astronomy 61 (Observational Techniques in Astronomy) and P31.03 (Research Methods in 21st Century Astronomy in South Africa) during the first five weeks. This is followed by one week observing in Sutherland, and students will spend their remaining time in Cape Town analyzing the data they obtained and receiving credit for Astronomy 81 (Independent Project). All three courses count towards both the physics and astronomy majors. Astronomy 61 satisfies the laboratory requirement, and Astronomy 81 satisfies the culminating experience requirement for the majors.

During their stay in South Africa, students will participate in astronomy themed afterschool programs and public observing sessions which are offered by SAAO. Students will be trained by, and assist SAAO staff in these activities. This experience will reinforce many of the basic astronomical concepts students have learned in class and expose students to a range of South African culture.

The Astronomy FSP is offered every other year, and the next Astronomy FSP will be in the Winter 2023 term. A brief overview of the 2023 astronomy FSP is provided by faculty director Professor Brian Chaboyer in this video. To apply for the Astronomy FSP, visit the Guarini Institute for International Education  web site.