My work takes an information-theoretic approach to investigating questions at the intersection of quantum theory and gravitational physics. My research interests include quantum information science, quantum field theory on curved spacetimes, interferometric tests of the equivalence principle, and relational formulations of quantum mechanics. 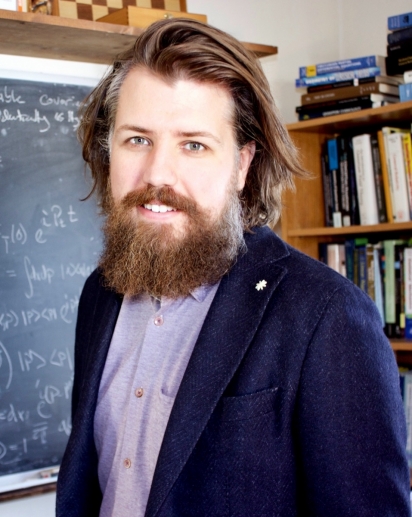 John Wheeler advocated a radically conservative approach to physics: Insist on adhering to well-established physical laws (be conservative), but follow those laws into their most extreme domains (be radical), where unexpected insights into nature might be found. Our most well-established laws of physics today are encapsulated by quantum theory and general relativity. Taking an information-theoretic approach, my research pushes these theories to their extremes, into an arena in which they must confront one another, in the hopes of uncovering new insights into Nature.

Einstein's theory of relativity explained what is known as time dilation: Clocks appear to slow down as determined by an observer in relative motion. Time dilation is not common at our everyday human speeds, however, when objects start to move close to the speed of light, time dilation becomes significant. The discovery of this counter-interview phenomenon overthrew Newton's long-held conviction that time was absolute and has since been observed for clocks moving as slow as 10 m/s.

When we describe the configuration of a system, we almost always make use of a classical reference frame; a common instance of this being that we usually specify the speed of a car with respect to the surface of the earth. The same is true in quantum theory. For example, we commonly describe the spin of an electron with respect to the orientation of a large Stern-Gerlach device.

Quantum reference frames associated with noncompact groups: The case of translations and boosts and the role of mass
A.R.H. Smith, M. Piani, and R.B. Mann
Physical Review A 94 (1), 012333 (2016)

In quantum theory, time enters through its appearance as an external classical parameter in the Schrödinger equation, as opposed to other physical quantities, such as position or momentum, which are associated with self-adjoint operators and treated dynamically. However, the canonical quantization of gravity leads to the Wheeler-DeWitt equation in which this notion of time disappears, constituting one aspect of what is known as the problem of time. The conditional probability interpretation (CPI) of time offers a solution. Built from the kinematical structure of standard quantum theory, the CPI posits that the dynamics of a system of interest should be specified with respect to a physical clock, and that the system's dynamics emerge from correlations between the joint state describing the clock and system. The unitary dynamics described by the Schrödinger equation is only recovered when one makes use of a perfect classical clock. I am interested in understanding the more general quantum dynamics the CPI suggests and its foundational implications.

Given the tremendous success of the standard model, our best description of matter at its most fundamental level is given by quantum field theory. However, the standard model is intimately connected to the symmetries of flat space and thus ignores the effects of gravity. This leads to the investigation of quantum fields in curved spacetime — a paradigm in which the quantum nature of fields and the effects of gravity are both important, but gravity itself can be treated classically and described by Einstein's field equations. This paradigm has led to our best clues as to what we should expect from a full-fledged theory of quantum gravity, such as black hole thermodynamics and phenomena occurring in the early universe. My research in this area is focused on operational probes of quantum fields, such as Unruh-DeWitt detectors and more general measurement models, and how these probes can witness the effects of different spacetime structures (e.g., topology and curvature) on quantum field theories.

Recent advances in satellite and quantum technologies have ushered in a new era of experimental physics in space. Quantum states can now be teleported from the surface of the earth to satellites in low earth orbits and it is expected that one day this technology will allow us to establish a worldwide cryptographically secure network based on quantum key distribution. Together with my collaborators, we are interested in how this infrastructure can be used for fundamental science, in particular, the possibility of new experimental tests of general relativity.

Quantizing Time
June 14th - 18th, 2021
Whatever the final theory of quantum gravity turns out to be, it will need to reconcile the incongruent ways in which time appears in quantum mechanics and general relativity. Quantum mechanics treats time as a classical background parameter, which is different than the way other observables, such as position and momentum, are treated. In stark contrast, general relativity promotes time to a dynamical quantity in the sense that Einstein’s equations relate how clocks behave in relative motion or differing gravitational fields. The aim of this conference is to discuss the full consequences of treating time as a quantum phenomenon in light of the recent progress on information-theoretic and operational descriptions of time as quantum observable. Topics discussed will include indefinite causal structures, the Page-Wootters formalism, relational quantum mechanics, quantum reference frames, the problem of time, and experimental implications.

Gravity in the Quantum Regime
June 17th and 18th, 2018
Physicists and philosophers from Austria, Canada, the Netherlands, and the United States, tackling issues at the intersection of quantum theory and gravitational issues, came together for the Gravity in the Quantum Regime conference. Topics discussed included tensor networks on curved spacetimes, gravitational decoherence, semiclassical gravity, and what happens to 'time' in a theory of quantum gravity.