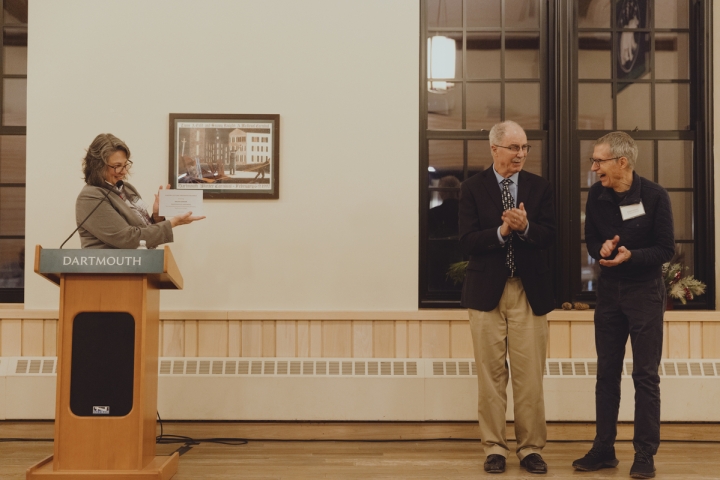 Green and white holiday decorations and the bright chatter of people happy to be together gave a festive air to the employee service awards banquets in the Class of 1953 Commons last month. Held in person for the first time since 2019, the buffet luncheon and dinner honored the milestone anniversaries of 271 employees, including Ralph Gibson, Guarini ’73, who retired in June after 50 years in the Department of Physics and Astronomy.

In his remarks, President Philip J. Hanlon ’77 said the service award ceremonies are often the highlight of the holiday season for his wife, Gail Gentes, and himself. And because the 2022 awards were the last he would help celebrate as president, they were especially grateful for the chance to thank the staff members for their “incredible service” to Dartmouth over the years.

It’s a joy to pay tribute to your extraordinary efforts, your creativity, and your determination.

“It’s a joy to pay tribute to your extraordinary efforts, your creativity, and your determination,” said President Hanlon, who also singled out 2022 as the busiest of his years as president.

Hanlon noted that staff across all departments helped make a number of major events a success, ranging from the 50-year anniversary of coeducation to the launch of the new West End.

“You orchestrated this on top of all you were already doing with your full workloads. That’s nothing short of extraordinary.”

He also thanked the awardees for the care and concern they showed one another in the fall as Dartmouth mourned the loss of cherished community members, and for their contributions to the Day of Caring.

“The way in which the Dartmouth family rallies around one another in good times and celebrations, but also in bad times, is indicative of the team-oriented approach we take to advancing our fundamental mission, and the reason Dartmouth is so well-loved and respected,” he said.

Executive Vice President Rick Mills  told the staff that Dartmouth wouldn’t exist without their work and their contribution to its mission.

“From serving the faculty and students, to maintaining the physical plant, to getting food out on the table for all of us, ordering supplies, managing our finances—all of you are contributing to this mission and we are incredibly grateful,” he said.

Reflecting on Gibson’s career, Mills noted that when he joined the staff in 1972, Richard Nixon was president, Carly Simon had just released You’re So Vain, and momentous events were unfolding on campus.

“Ralph, you’ve been here for it all,” he told Gibson, who received a standing ovation.

Gibson was finishing his master’s degree in physics at Dartmouth when he was offered the job of lecture demonstration manager.

It was an easy choice, and he knew right away that he would never want to work elsewhere, Gibson said after the banquet.

Gibson, who’s known for his professional expertise, creativity, and enthusiasm, was once dubbed “professor of happiness” by a student. The nickname stuck and will be memorialized on a plaque installed in the physics department. The Board of Trustees has awarded Gibson the title “Emeritus Staff.”

Looking back, Gibson said he enjoyed everything about his job—collaborating with professors to create demonstrations, fabricating materials in the machine shop, and the fact that he was always learning. But most of all, he stayed for the “wonderful people,” he says.

“They were just great to work with, to a person.”

The employees recognized for their service this year: Forty-year honorees who are not pictured: Christina McCarthy and Andrew Steele.