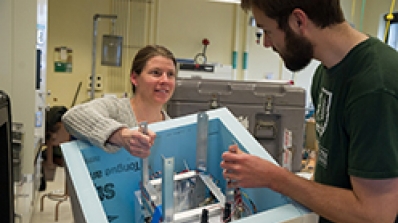 Abstract: The intensity of relativistic electrons in Earth's radiation belts is known to be highly variable, but the processes responsible for this variability are still not well understood. Observed rapid depletions and subsequent rebuilding of the trapped particle population imply an efficient energization process, in some cases accelerating electrons to multiple MeV energies on a timescale as short as minutes. NASA's two Van Allen Probes were launched in August 2012 to study the radiation belts. BARREL is a multiple-balloon investigation that works with the Van Allen Probes to study atmospheric loss of radiation belt electrons. The first BARREL balloon campaign was carried out in January-February 2013. Twenty small (~20 kg) balloon payloads were launched from the SANAE IV and Halley VI Antarctic research stations. A second campaign will be carried out next year. This talk will provide an introduction to radiation belt physics, and will summarize early results from BARREL and Van Allen.